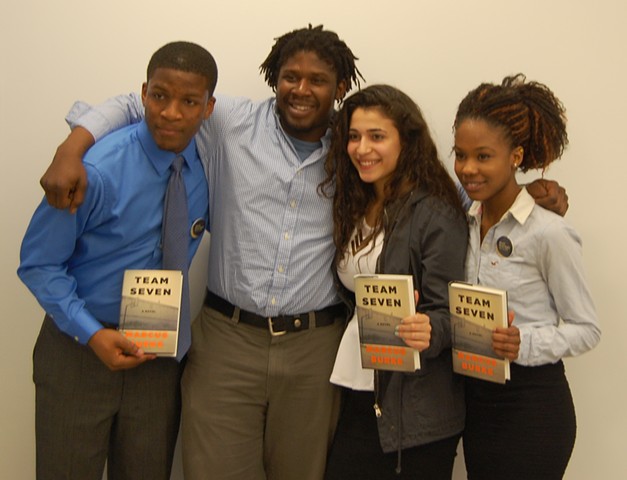 "A penetrating debut novel of a family and a community on the brink."---O, Oprah Magazine

"This is a book about people engulfed from childhood in complexities that would baffle any wisdom. But their hopes, though they are felt so often in the absence or failure or corruption of friendship, marriage and family, remain with them and sustain them. Team Seven achieves a rare degree of mature and compassionate insight. It is a remarkable first novel."---Marilynne Robinson, author of Lila, Housekeeping and Gilead

"A wonderful debut novel that moves with the rhythm of the streets...Burke crafts a street-smart tale of the possibilities and temptations of growing up. There is a power in his words, and the tale moves like a locomotive right to the end."---Kirkus Reviews (Starred Review)

"The writing is rich with street vernacular, adding authenticity and depth to Andre's inner and outer worlds. Burke is brilliantly coy..."---Publishers Weekly

"...the novel is thick with poetry, dense with lines of pitch-perfect verse that pulsate with the rhythms of the street." ---The Washington Post

"Team Seven is hard and clear-eyed and beautiful. It conforms to no vision other than its own, stands its own ground, and refuses to drift for even a sentence into any of the prefabricated narratives to which, in less artful hands, its characters' lives might be vulnerable. Filled all at once and irreducibly with violence and grace, despair and hope, and that most precious element, love, Team Seven will lay claim to the hearts and implicate the souls of everyone who reads it."---Paul Harding, author of Tinkers and Enon

"This is one of those rare first books you'll read again and again. The prose surges forward: relentless, plainspoken and artful, the people it describes laid bare, the tender heart at the center pulsing through each chapter. Unforgettable."---Ayana Mathis, author of The Twelve Tribes of Hattie

"Team Seven speaks directly to you from its opening burst of beautiful lines: "Pop and Uncle Elroy smoke the strangest cigarettes I've ever smelled. They smell sort of like skunk juice and gasoline." You are in the best of hands with Marcus Burke and his clear-eyed prose. Down-to-earth, comic, deadly and ultimately incredibly moving, this is a book that will last."---Peter Orner, author of Last Car Over the Sagamore Bridge